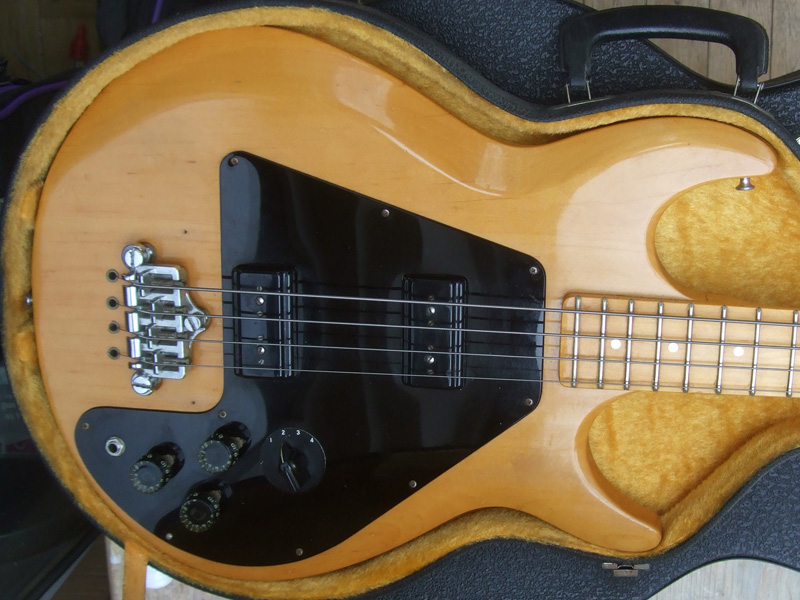 Over the last few weeks I’ve been fortunate to have some unusual 70s basses in the workshop. It was a coincidence that they were all here at the same time, although the two fretless basses were brought in by the same person.

The Wal Pro series of basses was introduced in the late 70s and this is an early version as shown by the 9-laminate headstock.

This came to me to fix a problem with the electrics, which are very unusual, having a large printed circuit under whole of the pickguard to which all the components are soldered.

I cleaned the series/parallel switches and replaced two potentiometers. The original pots had imperial sized shafts so the metric replacements had to be padded out with brass sleeves.

This mid-seventies bass was converted to fretless but the job was untidy. The synthetic fretboard was badly chipped where the frets had been removed and the infill (which looked like glazers’ putty) was crumbling away.

I recut the fret slots and inserted slivers of white plastic to act as markers. I glued these using Cyberbond Power Drop black superglue which I also used to fill the chips in the board.

One piece of trivia is that this bass was used on the recording of ABC’s seminal album The Lexicon of Love!

This bass has been stripped and given a new pickguard at some time early in its life and had a nasty headstock break that had been repaired and re-broken.

I carefully cleaned the old glue from the break and re-set it. Unfortunately the repair will never be pretty but it ought to give years more service.

The bridge only setting and the two in-series settings were silent, which indicated that the bridge pickup was dead. These pickups are not easy to fix, as the insides are epoxied to the case, but using some ingenuity I was able to get the insides out and have the coils rewound.