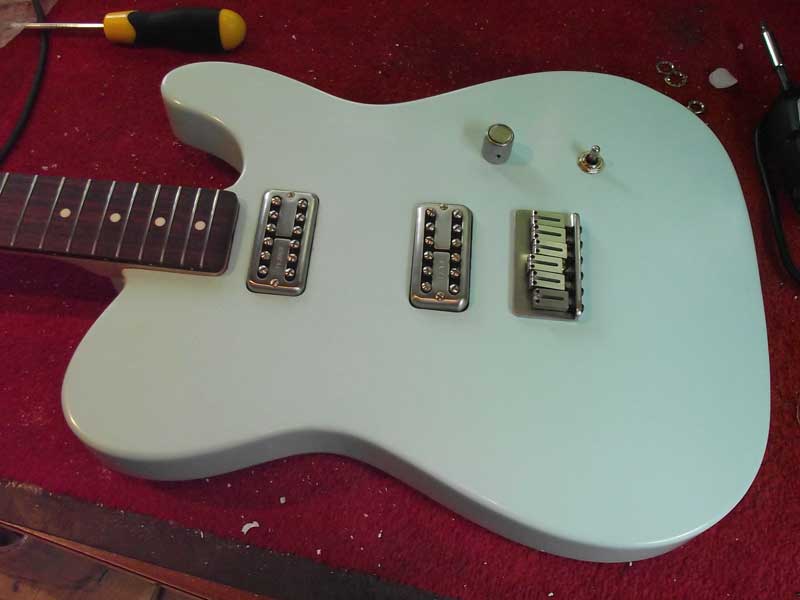 Here’s the original La Cabronita build before I took it all apart again to refinish Shell Pink!

The body came from Guitar Mill. Although I have bought unfinished bodies from them in the past, I’ve never before experienced one of their finished bodies. I’m pretty sure that the blue finish was pre-cat “lacquer” over epoxy primer.

The body is made from Paulownia and is amazingly light!

There was a heavy build-up of finish in the neck pocket and the first job was to remove it so that the neck heel had good contact with the pocket.

The controls are, in keeping with the guitar’s ethos, pretty simple. Just a 3-way switch and a volume control which has an S1 switch which clips some of the high frequencies, like an on-off tone control.

The neck was supplied by Musikraft. It’s a chunky affair, made from flame maple with a rosewood fretboard. The frets were not perfect so I levelled and crowned them as a matter of course.

I used a Stewart Macdonald jig for drilling the  locating post holes for the Sperzel non-locking tuners.

I fitted my neck kit as the guitar would be dissembled for shipping back to Italy and we wanted reassembly to be straightforward.

Here is the guitar nearly completed. It did get strung and set up before the customer asked me to repaint it.