I often get asked how to spray a TV Yellow finish and have been meaning for a while to demonstrate the process, so here it is.

I think it’s unlikely that TV Yellow guitars left the factory as yellow as they are today. As with “butterscotch” Telecasters the colour has become more yellow over the years as the lacquer has degraded in UV light. Contemporary adverts list the finish on the Les Paul TV and Les Paul TV Specials variously as “limed mahogany” (older models) and “cream”. As such there is no “right” colour for a TV “yellow” guitar and you can create anything from white through “wheat” to something very yellow indeed. 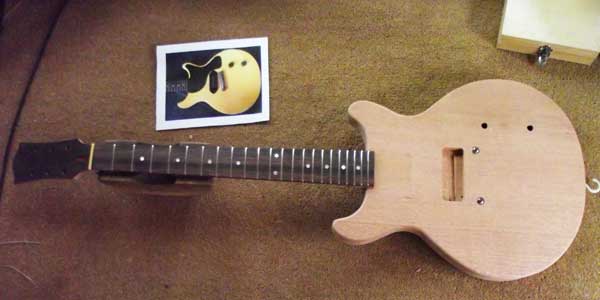 I’m basing my guitar on the 1959 Les Paul TV owned by Mick Ralphs from Bad Company which is a custard yellow shade.

The first and most important step is to sand every scratch from the mahogany*. If scratches remain, they will be emphasised by the grain filler step.

I started with 240 grit and progressed to using 320 grit using 3M Sandblaster abrasives, and kept going until I thought that every scratch was eliminated.

Once thoroughly sanded I used an air line to blow the wood dust out of the pores of the wood, as I want to fill the open grain at a later stage of the process. You could probably use a computer keyboard duster aerosol for this if you don’t have access to compressed air.

You might notice that I’ve routed a 3/8″ radius on the body edges as I’m aiming to reproduce a 1959 style guitar which I think feels nicer to play than the sharper-edged earlier version.

* Yes it’s got to be mahogany or a wood with a very similar grain for this to work!

The next step is to spray a white base coat. I used my White Primer which I knew would cover well in a thin coat.

Before spraying, I masked the fretboard sides, end and the nut using 3M fine line tape which gives a very clean line, and the fretboard face using standard masking tape.

The primer needs to be applied in such a manner that the grain of the mahogany is not filled with paint, so applied it fairly dry by spraying from about 10 inches away.

I applied one coat of primer then sanded lightly with 320 grit paper to denib, removing any raised grain.

Again, I used my air line to blow any dust out of the wood grain and applied another coat of primer before leaving it to dry overnight.

The look of a TV Yellow guitar rests on the grain filler being visible through the lacquer.

I used Rustins Grain Filler which I darkened with a touch of pigment. I’m not sure the pigment was entirely necessary and probably wouldn’t use it next time, but I did want the grain to stand out.

I applied the filler using mutton cloth, working in a circular motion, a small area at a time. I used a second piece of clean mutton cloth to wipe the surface of the guitar clean of filler, being careful not to lift the filler out of the pores.

I worked carefully over the whole of the guitar until I was happy that all the pores were filled as well as was possible. I felt this technique (rather than the squeegee/credit card application) gave the best compromise between thorough filling of the pores and minimisation of damage to the thin white base coat.

Finally I used a cloth lightly dampened with naphtha (lighter fluid) to carefully wipe any remaining residue of grain filler from the surface of the guitar, again being careful not to remove filler from inside the wood grain. 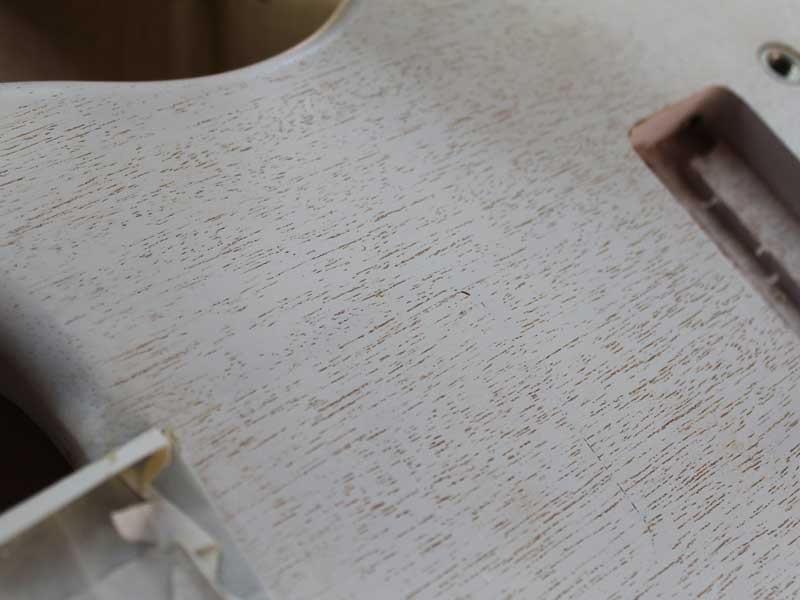 The grain filled guitar was of course not now perfectly smooth, due to the less than perfect filling of the grain so in order to provide a level surface for the colour I applied about four good of coats of cellulose sanding sealer to the whole guitar and left this to dry overnight.

The next day I block sanded the sealer coats level using P400 abrasive, wet with bit of Fairy Liquid in the water to help prevent clogging of the paper.

I did manage to sand through the base coat in one small area but touched this up invisibly by dabbing on some white primer before giving the area another light coat of sanding sealer.

At this stage I also blackened the headstock face by masking off the sides and spraying about three light coats of black nitrocellulose lacquer until the face was fully covered and an even black colour.

The body was now ready for the clear yellow coat.

Of course if I wanted a “TV White” guitar I would skip the yellowing step and go straight on to the clear coat.

If I was aiming for a wheat/cream colour as the guitars probably were when new, I’d use my Light Tint lacquer for the colour step. If I was after a full-on yellow I’d use my TV Yellow lacquer.

Whatever you use it’s important that you experiment first to make sure you can get the colour you want.

I’m actually using a lightly tinted amber lacquer that I made specially for the job. In hindsight, it’s probably a bit too yellow. Further down the page there is a single cut Junior which I sprayed in my Light Tint lacquer which is a better colour.

The image on the left shows the result of one coat of yellow. I could have left it there but I’m aiming for something darker. I have to be careful though as it’s all too easy to spray too many coats and end up with too dark a shade.

I wasn’t too concerned about achieving an even colour all over as the aged finishes often appear patchy where the lacquer differs in thickness either from the factory or from natural abrasion over the 50 years of use.

Here is the result of a few more coats of yellow. That’s more like it, I’m happy with that colour so will leave it there. 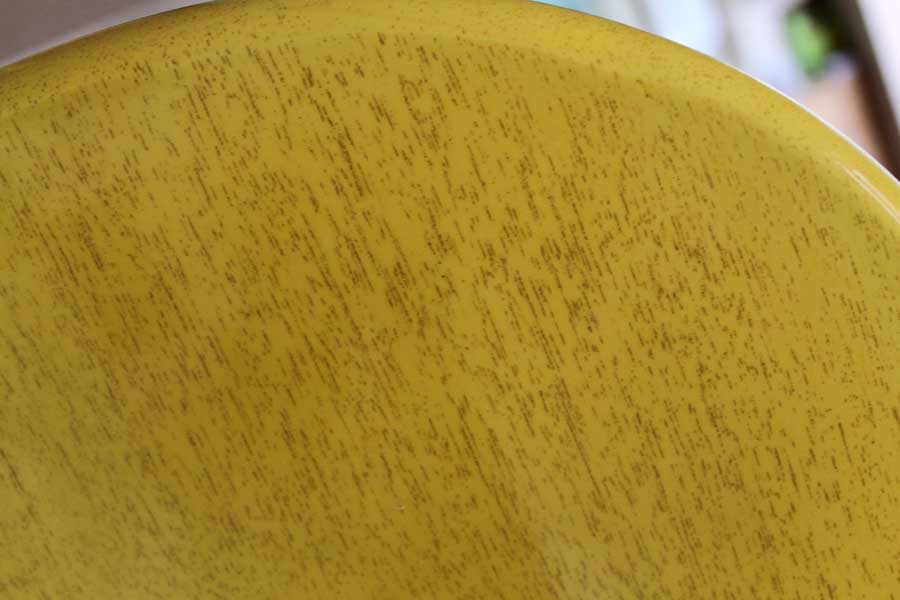 I sprayed sufficient coats of clear gloss so that I achieved a flat surface and enough of a thickness that I will be able to block sand without rubbing through. This will take at least two cans of Clear Gloss lacquer including the neck, but more is hardly ever a bad idea.

Once I had the clear gloss on, I left the guitar to dry and harden for a week before I block sanded, buffed and assembled. 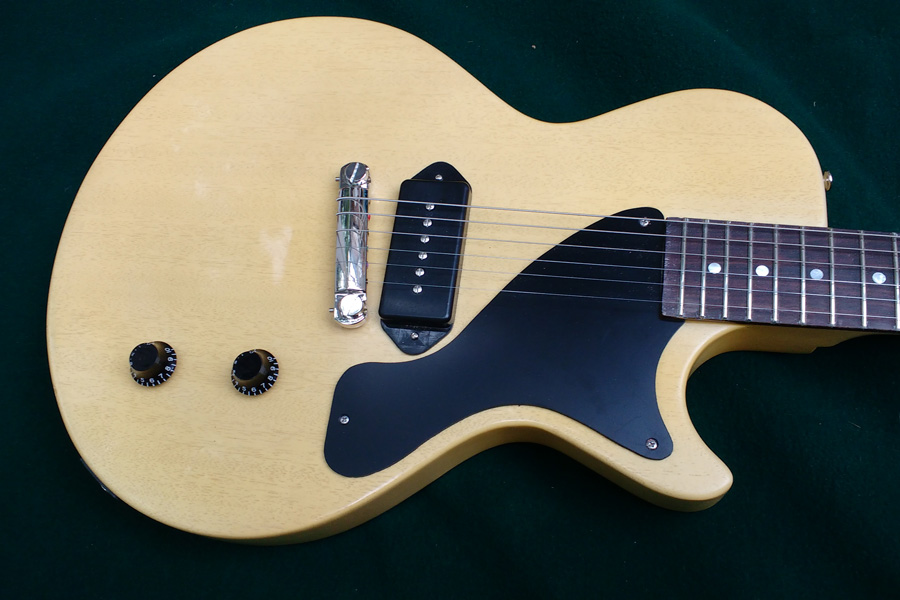 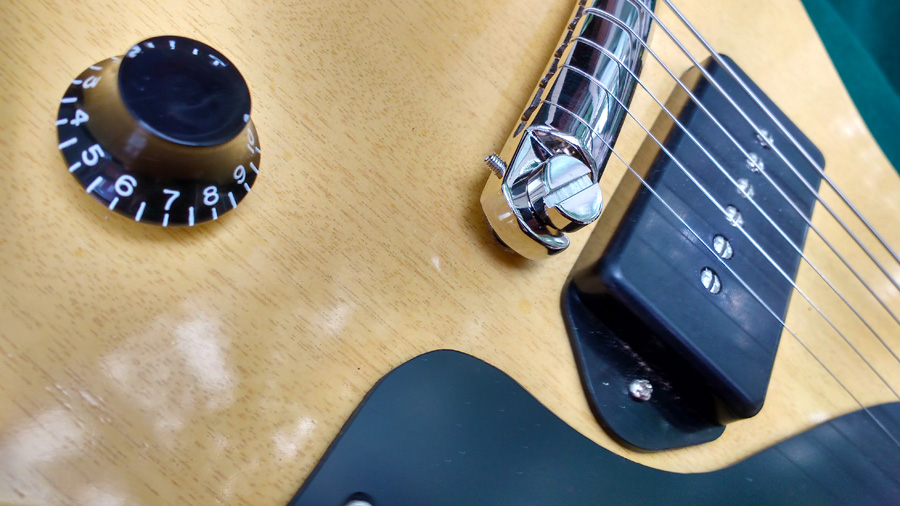 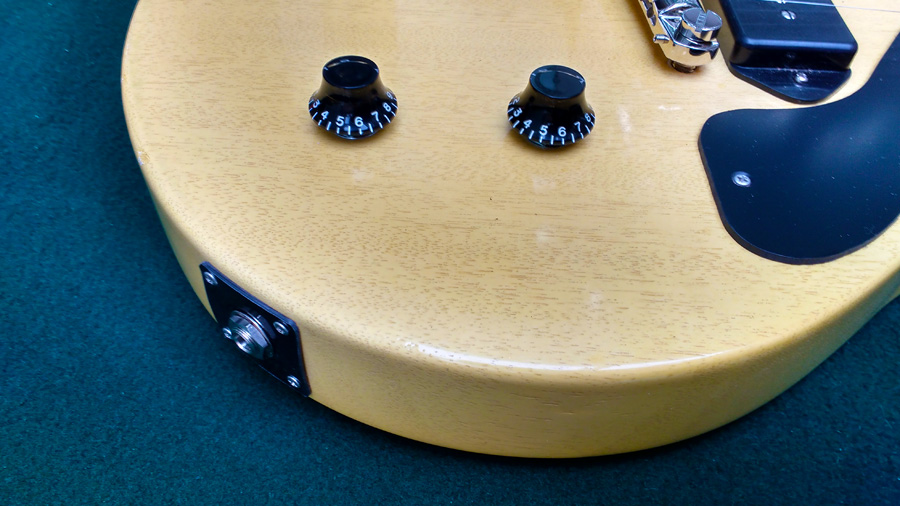