Rather than the S1 switch, I have used a normal push-push pot to bring in a tone circuit which just tames the high frequencies a bit.

I’ll need to dismantle this guitar at some point and refinish it. When I applied the clearcoat I accidentally used a spraygun which had some metal flake residue in it which gave the guitar body a bit of sparkle. I was impatient to assemble the guitar and try it out so it is currently a bit glittery. 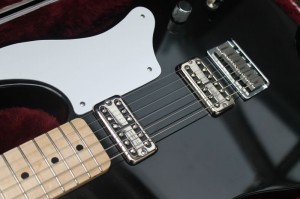 I have now repainted my guitar and am really enjoying playing it. It’s my favourite guitar at the moment and the TV Jones pickups sound wonderful.